Startseite > A Piece of Glacier-Ice, please – At Jökulsarlon in Iceland

It takes quite some time. And a few sunbeams are of pretty good use. Of course, I cannot immediately see how a glacier moves down a mountain, but I have seen one melting. At least a tiny wee bit. And my tongue was caught for a small moment on a shard of this melting ice-giant, just as long as it took this allegedly one thousand year old chunk to turn back into water. The glacier snout of the mountain Breiðamerkurjökull ends at the lake called Jökulsarlon - and here the ice crumbles, tumbles into the sea, then floats with the current through a narrow coastal gap, out to the Atlantic, becoming smaller and smaller.

Glaciers are no icebergs. They are formed from snow, falling in huge amounts, more than the mountain can handle. The snow pushes itself constantly forward, further on downwards, until this tremendous force meets the water and chips off in huge fragments. Here, on the Jökulsarlon, at the southern coast of Iceland, right next to the highway, you can witness this power of nature. On the one side of the street is the Atlantic, on the other side the lagoon with the adjacent glacier. A closer look is worth the trip, even when Reykjavik is 380 kilometers away.

Our amphibian boat with the four huge wheels has slowly rumbled down from the wooden platform into the Jökulsarlon. It is pretty windy. On the way here, there was some heavy rainfall. But in Iceland the weather changes almost hour. Sooner or later the sun will throw down some warming beams. The boat slowly chugs through the lagoon, passing huge ice chunks in bright blue, dark blue, white, and even ash-tinted black. It seems like a surreal field of rubble, as if a grenade has detonated in a pyramid of glass. Small pieces of ice are washed up at the lakeside, lying on the dark gravel like diamonds on a velvet cushion.

The further we come near the glacier snout, the more impressive are the masses of ice in the water surrounding us. Only few birds are circling around the lagoon. Seals are supposed to splash about somewhere. James Bond came to Jökulsarlon, Lara Croft as well. We are standing on the boat in bright orange life-jackets, filled with marvel. The distances are hardly assessable. Our ship has to keep enough distance to the big blocks - before parts of them might break off, damaging the boat. A delicate rumble in the distance: Somewhere a frosty artwork has cracked. Not much else seems to happen. It appears, as if we are sailing through a museum, the growlers are pieces of art, each one different, each one invites to linger in front of it, wanting to be analyzed. Small fragments bob up and down in the water beneath my feet. One of them is fished out and hacked into smaller pieces. Everyone on the boat gets a bit - I can watch how it melts, and of course I put my tongue on this translucent thing, that was formed, when America was unknown, Marco Polo had not been born and printing was only a faraway fantasy. Indeed it tastes like a boringly normal ice cube - only my brain tells me, that the confined bubbles contain air from a 1000 years ago. 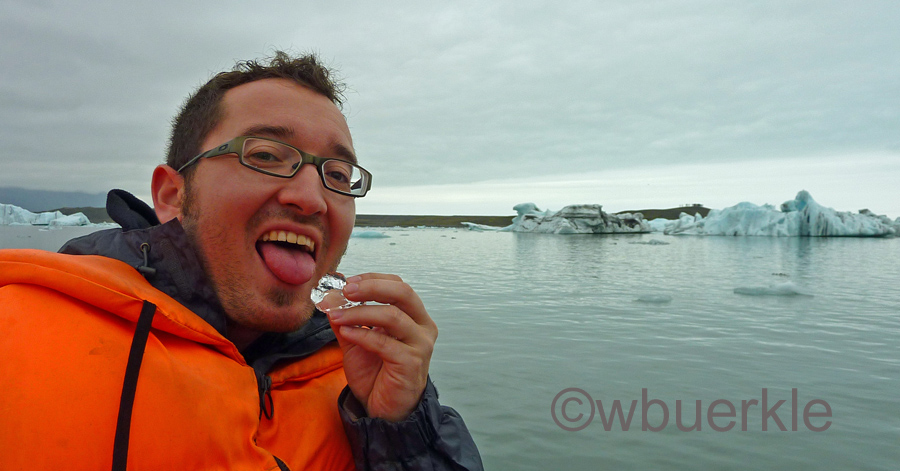 As we come closer to the glacier snout, it presents itself like a huge, soft lambskin, constantly changing its form. A giant individual, relentlessly pushing itself forward, almost unseen, then for a brief moment it screams and releases its frozen spawn. Reflections, forms and colors spread out. A moment ago, they crashed down from the glacier like a thunderstorm, now the growlers drift silently and peacefully across the salty lagoon. They agglomerate at the narrow coastal gap under the bridge, then become smaller, until they are fully absorbed in the Atlantic. The majestic splendor sinks, the artworks of nature are scratched off from existence.

This article in German: www.wbuerkle.de/news/einmal-gletschereis-bitte-am-jokulsarlon-in-island1/