Startseite > Cameroon - Hunting with the Pygmies

Cameroon - Hunting with the Pygmies

His arm has disappeared in the humid earth, almost up to his shoulder. The hand of the Baka-Pygmy fumbles around in the deep warm earth, grabs frequently into the void, searching for traces of bush rats. Somewhere in there it is hiding. It knows that we are hunting it, it knows that its life is in danger. The widespread den of the big rat - beneath one of the huge trees here in the jungle of Cameroon - has several exits. In front of one stands another hunter with spear in this hand, two dogs prance around the other holes, excited and with pointed ears. The bush rat just has to move a little, just has to give a slight peep, then her fate will be sealed: ultimately, it should serve as addition to the next meal.

The Baka-Pygmies usually eat everything that the rain forest offers them. They do not suffer from hunger, they find meat in the form of bush rats, monkeys, lizards or porcupines, they catch fish, eat herbs, roots, fruits and many other things. In nearby villages they buy clothes, rice, salt, lamp oil, soap, alcohol and tobacco. The last three items are not really necessary - they show me the bark of a tree that foams like soap and that they can use to wash their clothes. They can produce alcohol out of palm trees or grains; instead of tobacco they can smoke different dried leaves. Everything they need exists in the forest. The knowledge about the powers of Cameroonian nature is common knowledge, passed on for generations. But progress does not stop. The purchased goods simplify the bush peoples lives: the used T-Shirts are cheap and convenient, the Gin they consume even in the morning from a big can numbs them faster and stronger than palm wine. The money for these "luxurious" goods comes from tourists, from relatives who have left the bush, or from animals, timber and fruits being more or less legally sold at the street or in the next village.

But the forest and with it the natural territory of the Baka-Pygmies diminishes. On the path which we follow to their camp, a few miles south of the beach town Kribi, we can see huge man-made forest aisles. On the roads of Camerooon we see hundreds of trucks on their way to the harbors, loaded with gigantic logs from the forests. Ruthlessness and greed don't stop at borders: the Chad-Cameroon-Pipeline, finished in 2007, runs straight through the country. Despite occasional protests, the oil flows across mountains and through forests in the "armpit" of Africa - and even through archaeologically significant regions, regardless of problems created by the laying of the pipeline (see www.erdoel-tschad.de). Even the once supportive World Bank has now realized that the profit does not benefit the people living near the pipeline, but instead only makes the rich more wealthier. 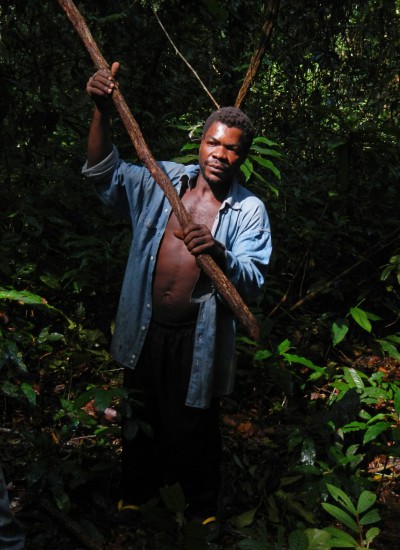 The Baka-Pygmies of Cameroon have no lobby in the state, there are few advocates and actually they are not even considered a "real" demographic minority - while there are more than 270 ethno-linguistic groups in Cameroon. The word "Pygmy" even is a collective term for numerous African tribes - and about as useful as the abuse-word "nigger". The "little people" of Cameroon belong to the Baka (or BaAka), a subgroup of the Mbenga. The few sturdy huts, which we visit near Kribi, are a base for several families. They still try to live an isolated life in the forest as hunters and gatherers. They don't care about borders, hardly speak English or French and live on a day-to-day-basis. They find their daily necessities in the rain forest, at the streams, and in the undergrowth which they cut across with their machetes. With one tree bark they heal Malaria, with another one they soothe their pains. Some leaves keep them awake, some make them dull. We slice through a liana, clean water pours out. You don't need plastic bottles around here.

Something is moving in the deep holes under the huge tree. The Baka hunter pokes through the reddish brown earth with a thin branch, listens now and again, then continues poking. Suddenly there is a rustle, a swift movement, a spear bolts down and strikes the bush rat's head. Blood gushes out, it jerks a little, another blow with the machete, and the animal, as big as a small cat, is tossed into the shoulder bag. The Baka are happy - because not every hole is promising. Some are deserted, sometimes the prey manages to get away from the hunters.

The Baka of Cameroon can hardly escape their doom. South of Kribi, near the border to Equatorial Guinea, a deep water port is being built with the help of Chinese investors. A huge project, that might generate high profits for the state through the export of raw materials, but that also affects the flora and fauna at this part of the coast. Concerns about the compatibility between the deep water port and a once proposed water protection area, already endorsed by the WWF in 2008, were shrugged off by the secretary of state with the words: "It is just a question of the right space-management". Five years later we can see centuries-old trees being chopped down, new roads being build. In a few years there might be lucrative single-crop farming with huge areas of bananas or palm-oil. While the resident people of the beach settlements (like Ebodje, where up till now sea turtles deposited their eggs) might profit through visiting workers, an enhanced infrastructure and increasing prices for their land, forest people like the Baka can only seek refuge in parts further away from the coast, like the Campo-Ma'an National Park. If they choose to do so. 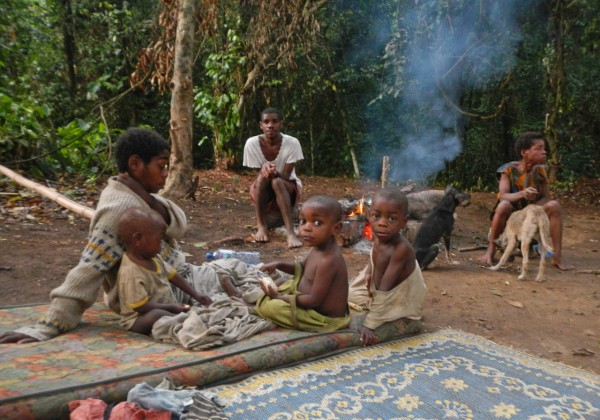 We are sitting around the fire, in the evening at the Baka-Camp. The air is more pleasant and not as sticky as it was a few hours before. A soft breeze is moving through the leaves, a few raindrops patter down. A huge tree trunk is lying in front of several Baka, they are drinking beer and gin, they chat with each other, sometimes laughing. Eventually one of them takes a small branch and starts to drum rhythmically on the big trunk. It doesn't take much time, the others join in. The wooden thunder sounds with an hypnotic beat. Suddenly a veiled figure steps into our circle - in the fiery glow it turns out to be a Baka-child in a leaf-adorned costume. In a trance-like state he topples down, then jumps up to the drum beat, chimes the little bells on his feet. Another Baka bolts into the circle, he shouts at the mysterious being, dances around it, wants to bewitch the spirit of the forest. It is a ritual, hundreds of years old, carried out countless times. With their music they tell tales from their lives, they thank nature and they pass on their knowledge, their tradition and their history. And although we are part of it at this evening, we only play the role of visitors, the White Man, who penetrates their territory and who tries to absorb a few aspects of their presence. Our brief impact will have little consequences, but the impact of globalization already changes their lives significantly. They are about to share their destiny with the American Natives, the Maori, Aborigines, and Yanomami.