Startseite > Hard Hits and Bleeding Love - The Hamar in Ethiopia

Hard Hits and Bleeding Love - The Hamar in Ethiopia

The red blood can clearly be distinguished from the brown skin. It flows slowly but steadily in a small trickle down from the back of the young woman, eventually wetting her loincloth. She does not reveal any signs of pain. The woman continues dancing and singing, blowing into her horn from time to time, rattling with metal clamps on her calves. She continues, marching in a circle, stomping and jumping, regardless of the heat. Her hair, dripping with red clay, ocher and butter, shines in the sun.

She staggers towards one of the young men, provoking him, screaming and challenging him. He ignores her performance. She dances on, even pushes him, until he gives her a spark of attention. Suddenly he jumps up, runs towards her, raises a thin rod from the ground. Her music-making, the laughter and teasing continue. Lightning-fast the young man strikes out and forcefully lashes the dry piece of wood on her back. Again her skin bursts, again the blood flows. One part of the act is completed. He sits down, she dances on, blowing into her horn. Without batting an eyelid, she endures the stroke and the pain. 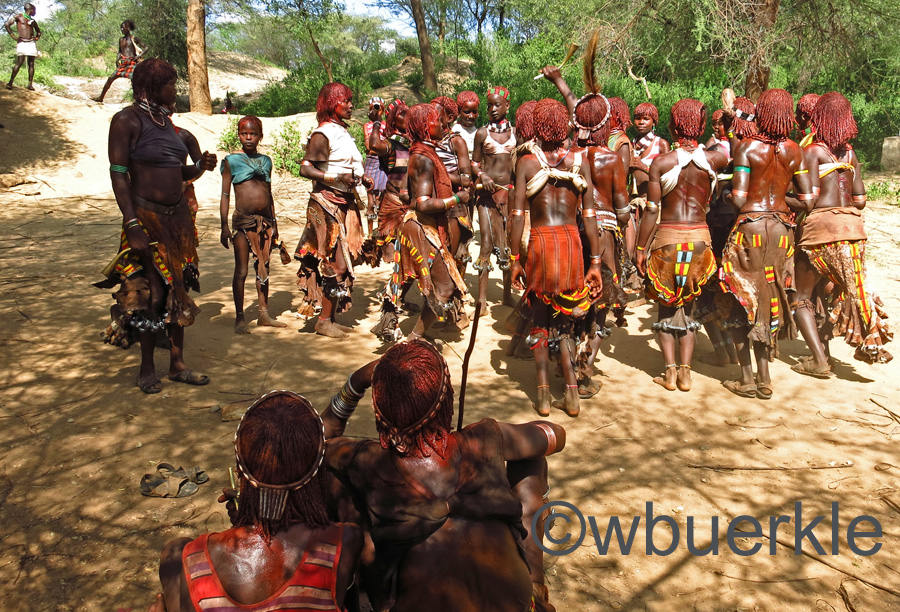 It is a strange custom - this traditional whipping of women, here in southern Ethiopia, with the tribe of the Hamar. But it is part of their ritual of cattle jump, in which a young man, as the title says, has to balance on the backs of some oxen to prove his manhood. Relatives and friends all want to see how the young man presents himself and whether he can now start a family on his own. And the women heat up the mood in advance with their masochistic dance. They are all related to the jumper, they all show their support for him and his intentions. They will be whipped by men, who already completed their jump, but are still unmarried. And the deeper the scars decorate a woman, the more intense is her affection towards her family. 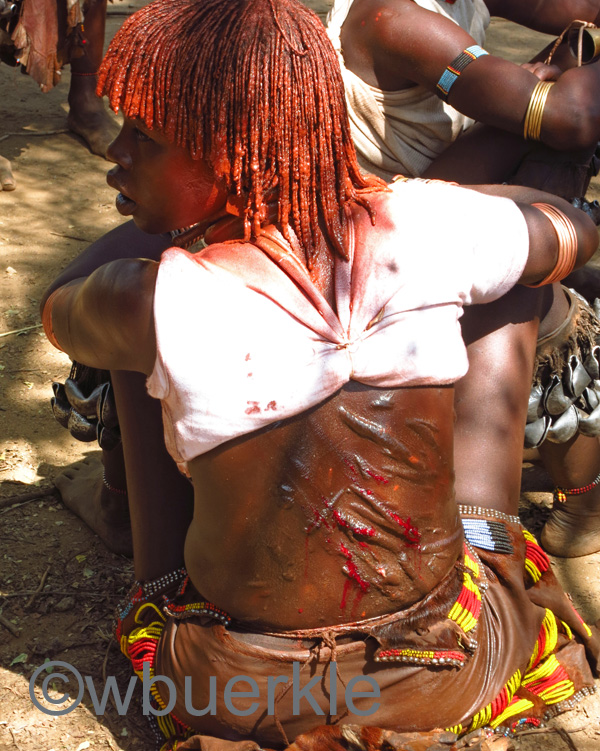 I can only watch this rite with amazement. Each heavy struck makes me cringe. But the women apparently are unfazed after hours and days of celebration. Many just sit around bored; some seem to have enough of the blows. One of the bleeding women suddenly warps  into the bush, sweating and stumbling - maybe she has to pee, maybe she has to throw up. She certainly didn't drink anything for a longer period of time. It is becoming a tiring event. The desire for the blows and the blood is present not only in the Hamar women - but also in the white people, who do not remain in the background, but persistently edge closer to the wounds and to the action. The more blood runs, the better, the more remarkable the behaviour of the people, the more interesting for the cameras. The astonished, disgusted staring becomes a fascinated gape. Local leaders tell us where to properly stand, so that the ceremony can proceed according to tradition - but repeatedly one of the foreigners charges forward, pushing the camera closer towards the men, who are now applying paint to their faces. One older Hamar woman becomes increasingly annoyed. Angrily, she wants to chase him off. Today, she has already glared too many times into the lenses. 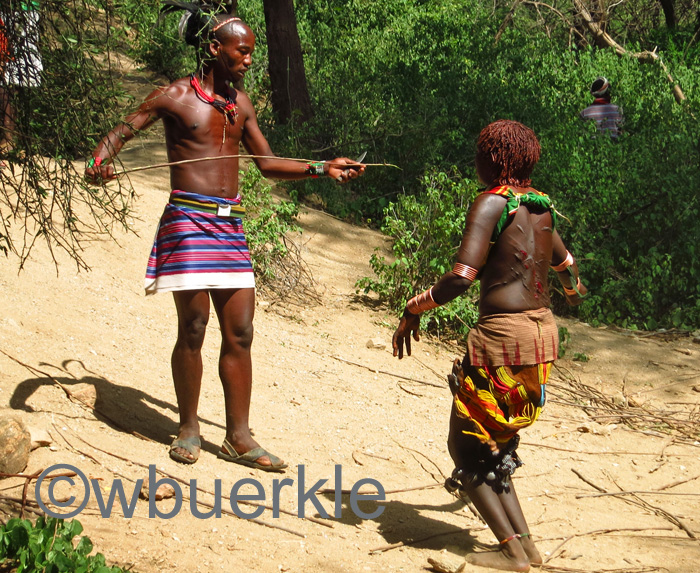 It is a difficult balancing act: On the one hand the Hamar want to continue their tradition, on the other hand the tourist dollars are too important, so the visitors need to be accepted. The money, so I can hear out, apparently promotes the frequency with which the event is continued, not least so that the families can finance the celebrations around the cattle jump. And no doubt the money is also the reason why the Hamar endure our presence at all - but I can sense the reluctance of several tribe members towards the commercialization.

Thus, shortly before the cattle jump, the young man is shielded by his relatives from all prying eyes; and directly after returning from the backs of the oxen, the brother of the jumper fobs off several photographers - he would probably prefer to celebrate alone with him now.

It is a complex affair that has arisen here. Because if the money of tourists increasingly gains importance, it waters down the tradition and the initiation ritual degenerates into a brutal Folklore number. But is there a way out? The tourism industry in Ethiopia grows as strong as the curiosity about the country. One cannot stop travellers to visit the south of the country - it would be hypocritical to demand it. Unavoidably, the Hamar have to adjust to this increasing attendance - and possibly swing the whip not only on the backs of women, but also to shoo away too intrusive photographers. 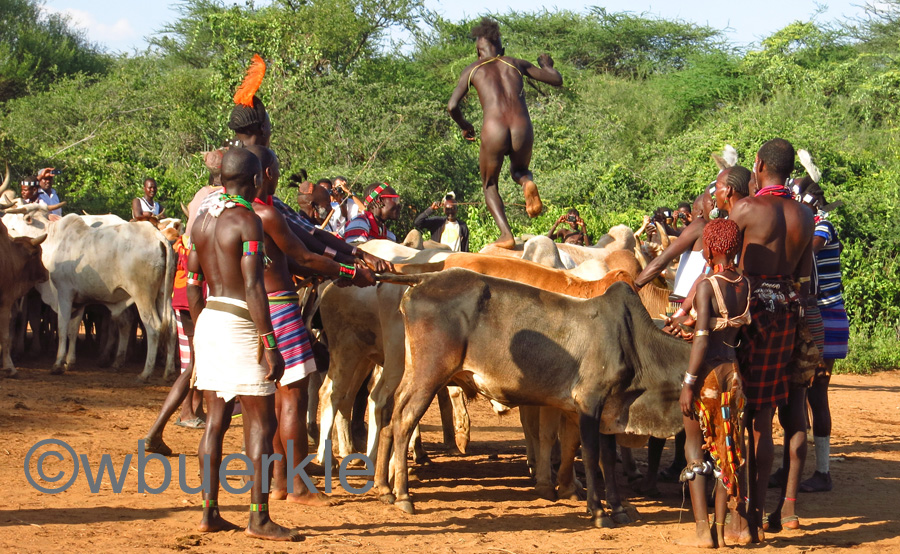 Read this article in German: https://www.wbuerkle.de/news/harte-hiebe-und-blutende-liebe-bei-den-hamar-in-athiopien1/